THE ORIGIN OF MEMORY FOAM 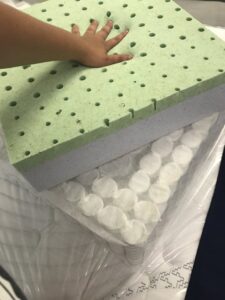 Memory foam was originally invented by NASA, by a contractor named Charles Yost. Though its original uses are widely argued and range from helping the astronauts with pressure relief of the g-force on takeoff, to cushioning airplane seats to improve survival rates in plane crashes, and padding the helmets of the Dallas Cowboys  in the 1970s and 1980s.

One thing we all can agree on is Yost helped to change sleep forever.

In the 1980’s NASA released the first memory foam technology for commercial use. In 1991 Tempur-Pedic was the first company to make a mattress out of memory foam. It was introduced by Fagerdala World Foams, a Swedish technical foam firm. Today, year 2020 Tempur-Pedic is still the top of the line Name Brand, in the mattress industry. The technology rights of memory foam has been shared among dozens of manufacturers, and Tempur-Pedic is pushing temper foam into new industries including; cars, prosthetic limbs, and amusement parks.

Although, Yost passed away in 2005. After his death he was inducted into the Flexible Polyurethane Foam Hall of Fame. Which promotes the growth and betterment of the North American Polyurethane Foam Industry and a information source for furniture industry members.
Since it was first invented by Yost, memory foam has changed a lot. Today, most mattresses over the $500 price range have some type of memory foam constructed in them. Usually featured in the comfort layer, a customer can expect to see memory foam included in innerspring, hybrid, latex and higher priced air mattresses.

When memory foam was first introduced many people complained that it slept hot. Most new mattresses that have memory foam include some type of cooling material in them to better solve this complaint. The most common is known as cooling gel memory foam.